Statement For Art Gallery of Hamilton 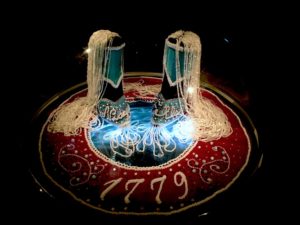 2017 marks the 150th birthday of Canada. There will be many celebrations and festivities
across the country. I remember 1967. The year commemorated 100 years of Canada as a
country. I was thirteen at the time. I was a member of a marching band from the Six Nations Reserve. On that hot, sticky day we marched in a parade in Brantford. Our uniforms were made of felt and mine had fringes cut into the bottom of the skirt because I was a girl. We wore headbands with a feather. We wore white turtlenecks and over that we had a vest also made of felt. We wore our band uniforms with pride, happy to participate in that historic day. I don’t remember how long we had to march or the music we played. I just remember I played the alto saxophone, sweat pouring down my face.

Since then things have changed drastically. Today we would never put our children in costumes that showcased stereotypes of our Native culture. Feathers would be out of the question. And turtlenecks on one of the hottest days of the year would be insane. What were our parents thinking? In their time this was the best they could do with no financial backing. They wanted their children to take part in an event that most Canadians saw as joyful and hopefully leading to better things to come.

As I contemplate the years that have culminated until now, I feel the Indigenous world has increased in knowledge, awareness, justice and in imagination. We no longer have to process our whereabouts, or get permission to move forward from the local Indian agent. Education is the key element here, in every category. We are learning our history and how it has affected us, rarely in a positive light. History books had to be re-interpreted and written from our perspective.

Six Nations history is one of the most documented communities with accounts involving the creation of the United States of America and Canada. The history is blood soaked and rife with political propaganda. The Iroquois have often been seen as the vilest and blood thirstiest people to have erupted from the earth’s surface.

After the signing of the Declaration of Independence in 1776, Haudenausaunee communities were destined to be stamped out. It was god’s will and this had to be obeyed. Besides they had all of this great land now known as the state of New York.

George Washington was the most terrifying person to the Haudenausaunee. Washington carried the name “Town Destroyer”. This was whispered amongst Iroquois communities. He commissioned the Sullivan and Clinton campaign against the Oghwehowe. They burned crops, longhouses and livestock. He wanted to eliminate their existence. His words to Sullivan and Clinton were “defeat the Iroquois”.

In the winter of 1779, after the Sullivan and Clinton campaign, the survivors of this scourge, tried to make their way to Fort Niagara. They were convinced the British would be in better circumstances where they would be able to provide food and shelter, until they could once again return to their traditional homeland and start anew. 5000 made it to Fort Niagara. Most starved to death along the way. The survivors hardly had any clothing on their backs, empty bellies, near death, they reached Fort Niagara disappointed by the reception they received from their British allies.

There is no photographic documentation of physical brutality giving evidence of Iroquois people being erased from their homeland. With 1779 I want to show an aggressive procession within the confines of North America and how the land was taken.
As repayment to the Six Nations for the land they lost and for their loyalty to the British during the American Revolution, six miles of land on both sides of the Grand River was purchased from the Mississauga First Nations from its source to its mouth and was given to the Iroquois. The Haldimand Tract is approximately 950,000 acres. This land continues to be a debacle and a convenient modern day land grab.

When the Six Nations arrived on the shores of the Grand River in 1784, I can only speculate their reaction to the land that lay before their eyes. They were tired, war worn and hopeful. They must have been anxious to start plowing fields, building houses and again making their society safe and sound, functioning for their families.

Around the year 2000 I found a pair of stiletto high heels at a Value Village store. The spikes and goldenness of the heel caught my attention and gave way to thoughts of chances of fortune. I immediately thought of Niagara Falls and how it represents cheap thrills and the “get rich quick” schemes it conjures.

Niagara Falls to the Haudenausaunee represents all that is sacred. The natural power of the falls as it cascades over the escarpment and the sound of roaring thunder as it does makes the visitor aware of their own spark-like destiny against nature.

As I make my way past the neon lights, the ferris wheel, the man’s voice urging you to take a chance and all of the other cheap attractions, I remind myself of what this place used to represent and to whom. And where it is and why Canada is now Canada.

The inter-generational trauma in Indigenous people is still evident today. We, however, are learning how those past events have made an impact on our souls and minds. With this knowledge we are working towards making society purposeful and enriching. We work in the direction of ending the trauma and letting our children be children.